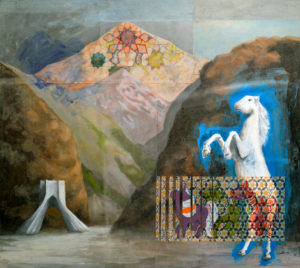 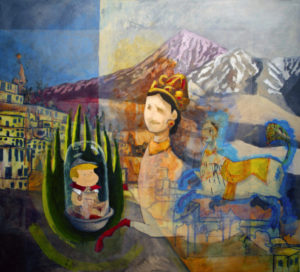 Our Second Saturday at the Alley features the photography of Mehran Mesbah.  Mehran’s work is inspired by the process of deformation: the effect certain forces have on physical forms over time.  Natural formations such as mountains have been of particular inspiration.  The result of millions of years of potential enacted through the upward pressure of tectonics and the downward process of erosion.  Similarly, human societies have encountered analogous forces of cultural torsion.  The ebb and flow of its artifacts, language, and traditions consumed–knowingly or not–by the contemporary individual. Mehran’s work exerts natural forces upon cultural structures as a reflection on transience and the indefinite continued reinterpretation of visual history.

Having spent many years traveling, Mehran Mesbah was a bit of a wanderer.  Born in Reno, Nevada, he spent most of his childhood exploring the eastern Sierra Nevada and Lake Tahoe.  In 2001, he moved to Alberta, Canada, and the years slowly moved down the northwest from Washington to Oregon eventually making it to Sacramento after a year in Paris in 2009.  In 2012, he received his MA in Studio Art from CSUS.  Since then he has decided to make Sacramento his home.  Mehran exhibits both regionally and internationally.  In 2015, the Kunstwerk-Carlshüette invited Mehran to participate in the International NordArt Exhibition held in Büdelsdorf, Germany.  In summer of that same year, he returned from a 3-month artist in residence at the Shangyuan Art Museum in Beijing, China to Sacramento where he created The InsideOut alternative art space.  In 2017, he began making large scale installations at Art Street and at Beatnik in 2018-19.  In 2020, Mehran helped his parents save their business and house during the COVID pandemic.  He currently teaches drawing and painting at Yuba College and enjoys participating in his local and global communities.